Every summer when tomatoes are plentiful, I think about making a tomato tart. There is something very appealing about the idea of ripe, juicy tomatoes encased in a flaky, buttery crust. Add a salad and a glass of wine and you have a simple, elegant dinner. I’ve tried a few of these tarts over the years, and while they are almost always pleasing to the eye with their golden brown crust and concentric circles of ripe red tomatoes, there is always the issue of keeping the crust from becoming soggy. Tomatoes are, after all, 90% water.

Imagine my delight when I came across a recipe for a Rustic Tomato Tart in the August/September issue of Cook’s Country magazine that claimed to have solved the soggy crust dilemma! I had to give it a try for myself. Indeed, this was the best tomato tart I have made to date thanks to a few tricks designed to keep the crust crisp and flaky:

One of the other things I love about this recipe is its charming rustic appearance…no tart pan required! Simply leave a border around the edge of the tart and fold it up and over the filling, folding pleats into the dough as you go. So easy and no special equipment.

In the interest of bringing my own Nordic vibe to this recipe, I replaced some of the all-purpose flour from the original recipe with dark rye flour and loved the results….just a hint of that slightly sour, earthy flavor of rye really added to the tart’s rustic nature. As I mentioned above, I also used an aged Danish Havarti for the cheese rather than the Gruyére that was originally called for.

If you are looking to put those late summer tomatoes to use in something really lovely and delicious, I highly recommend giving this stunning tart a try. 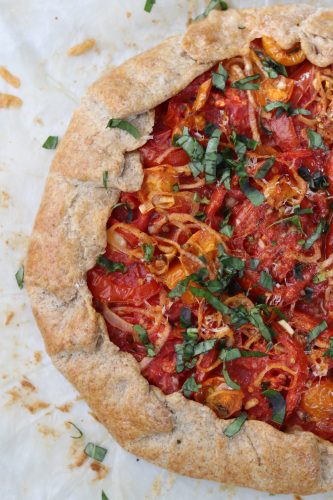 An easy rustic tomato tart with a rye crust.  A stunning way to use up those end-of-summer tomatoes!

1 ½ pounds garden tomatoes (a mix of any variety is fine), cored and sliced into ¼ inch thick rounds

3 ounces aged Danish Havarti cheese (or Gruyère if you can’t find it), about 1 cup shredded

To Assemble and Serve: